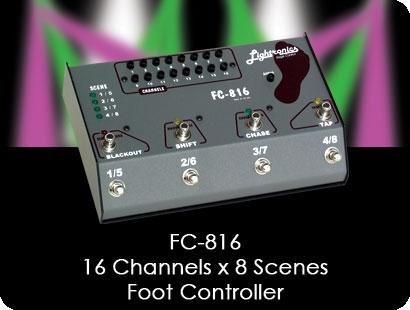 The FC816 is suitable for live performances, stage, disco, night club, and other event and artistic applications.

It is a 16 channel, 9 scene, multiplex output dimmer controller. It is intended as a foot operated controller. Eight scenes can be user recorded and scene fade time can be user set. A ninth scene is available as a manual mode scene. A blackout function is provided. The unit can produce four user recorded chase sequences of up to fourteen steps each. Chase advance timing can be controlled by the operator or by an external audio signal. Chase steps may consist of user set sequences, entire scenes, or a combination of both. The FC816 will operate with MIDI equipment which can be used to control scenes and chases.