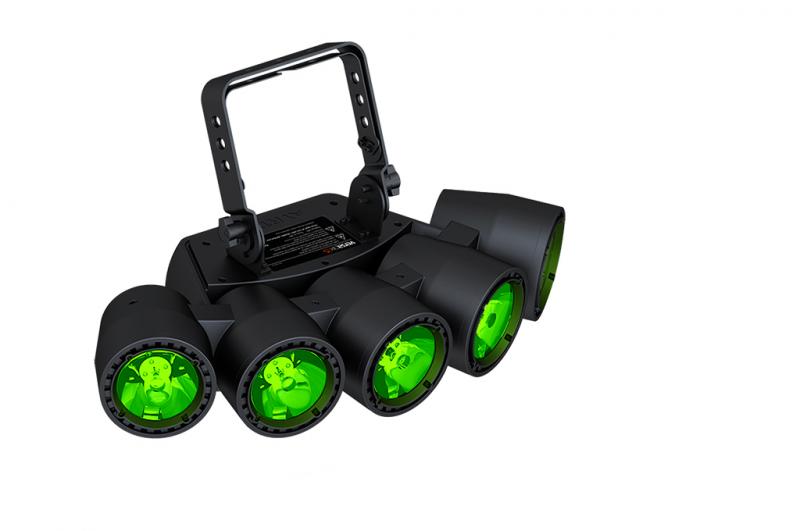 VERSAPIX, a contraction of versatile and pixel, is a veritable fan of light. Brilliantly evolved from the VERSAPIX 100 concept first introduced in 2012, the VERSAPIX-RS is the first in the new ultra-radical "RS" product series. A new 40 Watt reduced-scale multi-chip RGBW LED emitter has been combined with innovative 94 mm diameter high-efficiency optics.

Once again pushing the limits, this luminaire can generate an ultra-powerful 3.5° beam with a record-breaking centre-beam intensity of 200 candela per lumen. With three times more power and six times more centre-beam intensity, the VERSAPIX-RS offers infinite possibilities for creating 3D volumetric lighting effects regardless of the ambient light conditions.

Because of its configuration and power, the VERSAPIX-RS required the development of a specific new cooling system for each of the emitters that evacuates the air at the edges of the optics while preventing haze and dust contamination (patent pending). The VERSAPIX-RS, the most mobile of the fixed luminaires, was designed to be modular, with five emitters in a fan-shaped 90° arrangement, enabling independent control of each of the emitters. This offers a range of installation possibilities, such as combining the luminaires to create complex shapes (disks, spheres, cylinders, etc.) or using individual luminaires in a variety of architectural configurations. With the VERSAPIX-RS, your imagination is the limit.